Exhausting but exciting day.  We got the Metro from Flaminia to Termini and then from Termini down to the Colosseum.  Coming up from the Metro station and suddenly being face to face with the Colosseum was awe-inspiring, even though I’d seen it before.  No photo can prepare you for the incredible scale of it! 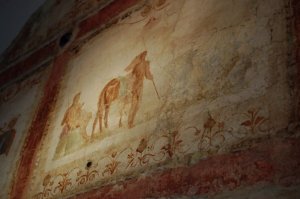 The only fresco I was able to get a picture of

I just can’t believe it’s all still there – it’s a far cry from the crappy little walls and ditches of Roman remains in Britain!!

After that we went into the Museum on the Palatine, then the Domus Flavia, Hippodrome and various other bits and pieces, and then it was down through the Forum Romanum and across the road to the Forum of Augustus and then the Forum of Trajan and its museum. 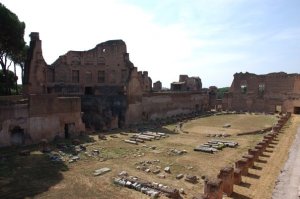 The so-called 'Hippodrome' of Domitian's palace

There were some amazingly preserved Roman streets with shop fronts – it was almost like stepping back in time – and it was fantastic to see Trajan’s Column up close too. 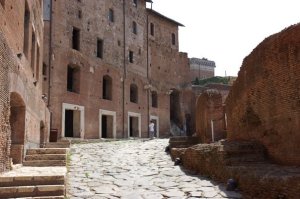 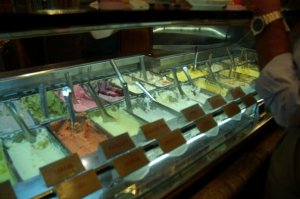 Part of the huge range of flavours at Giolitti's

After that we stopped for lunch, and then we walked to the Ara Pacis.  En route we stopped at a fantastic ice cream place called Giolitti’s, which is one of Rome’s most famous gelaterias.  I had a medium size one which turned out to be massive – banana and caramel flavours.  We all made an absolute mess of them as they melted faster than we could eat them – some people had melted ice cream running down their arms!
Seeing the Ara Pacis was amazing.  It’s not in its original location but in a huge air conditioned glass museum place which was pleasant.  It was bigger than I thought it would be, and you could walk on it which was cool.  We had a group photo in front of it, and got deliberately soaked in the fountains outside and it was so hot that our clothes and shoes dried immediately. 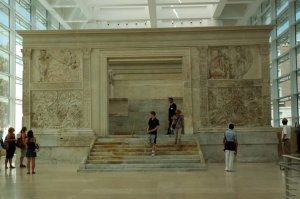 Outside the museum, Augustus’s Res Gestae is inscribed on the wall, and the remains of his Mausoleum are opposite, looking rather forlorn and fenced off.

Then a few of us walked home, as we were all exhausted.  That is, we’d finished for the day so we chose BSR instead of stay out in the sun.

Had another enjoyable evening.  At 6.15pm it was a seminar in the (very hot) library on Roman topography, and after that we all went up to the flat of Andrew Wallace-Hadrill, the director of the BSR, and his wife, who were both lovely.  We had drinks out on the balcony and then it was time for dinner, which wasn’t great foodwise – very thick minestrone-type soup, then a selection of disgusting seafood.  So didn’t eat much, but I’m not really that hungry anyway and I guess the food can’t always be exactly to my taste!

I graduated from Oxford University in 2009 with an MA in Classical Archaeology and Ancient History from St John's College. After graduating I worked as a Geographic Researcher at Holidaylettings.co.uk, spending lots of time researching and writing travel guides to worldwide destinations, developing my copywriting skills. After working as a copywriter and content consultant at White.net (formerly SEOptimise), where I most enjoyed working with travel clients, I went self-employed. I now divide my time between freelance copywriting and running the business I set up with my boyfriend - AirExperiences.co.uk - selling aviation gift experiences. In my spare time I'm training for a Private Pilot's Licence, and I also enjoy travelling, wine and baking. My favourite authors are Charles Dickens, Gabriel Garcia Marquez and Bill Bryson.
View all posts by Rachel Ingram →
This entry was posted in Looking back and tagged Ara Pacis, Augustus, British School at Rome, Colosseum, Domus Flavia, Forum and Markets of Trajan, Forum of Augustus, Forum Romanum, Giolitti's, House of Livia, Mausoleum of Augustus, Palatine Hill, Res Gestae, Rome, Trajan's Column. Bookmark the permalink.
Loading Comments...
%d bloggers like this: