I returned last week from yet another absolutely fantastic trip to Rome, staying in the ever-brilliant Bed and Breakfast Julius Caesar.  I was with two friends, one of whom had never been to Rome before, and another who had only been once on a school trip many years ago, so I went into full-blown tour guide mode and we spent a lot of the holiday walking round Rome.  It was hot and sunny and I made sure they saw all the usual stuff, as well as doing a day trip to the Ostia excavations and then the beach.  And of course there was a fair bit of eating involved, not to mention a rather fabulous (and very expensive) wine bar overlooking the Spanish Steps and Trinita dei Monti.

But on any trip a little alone time with Rome is always important to me, as is doing new things, so I combined these two requirements on a solitary early morning trip to the Protestant Cemetery.  Well, I say early morning:  it opened at 9am, and by that time it was already about 24 degrees even in October. 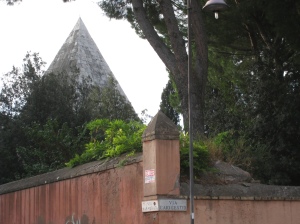 A view of the Pyramid of Gaius Cestius

I got there for when it opened and had the privilege of exploring the cemetery alone, which was wonderful.  Call me morbid, but I actually rather like cemeteries.  They’re tranquil places, and it’s always interesting and poignant looking at the stones and imagining the lives and stories of those underneath them.  The Protestant Cemetery has the added attraction of being directly alongside the Pyramid of Gaius Cestius, a marvellous Augustan-period freedman’s tomb, of which the cemetery affords by far the best view.

Close-up view of the Pyramid of Gaius Cestius

I should add at this point a little about the history of the cemetery.  Obviously Italy is a Catholic country, but Rome has a long history of being visited by non-Catholic foreigners, and in particular the English. Think, for example, of all the Grand Tourists who found their way there in the 18th and 19th century:  poets, writers and artists all seeking inspiration from Rome’s incredible history and romantic environs.  Many chose to settle permanently in Rome (I maintain that I will join their number one day), while others died before they could return home, and the Protestant Cemetery provides a final resting place for many illustrious names in the literary and artistic world from that period.

It is most famous for being the place in which Keats and Shelley are buried, and, being most interested in Keats’ grave (having studied his work at GCSE), I devoted the first portion of my visit to locating it.  This didn’t take long; having stopped to observe several tombs modelled on the Tomb of the Scipios, I found Keats’ final resting place barely a stone’s throw from the Pyramid. 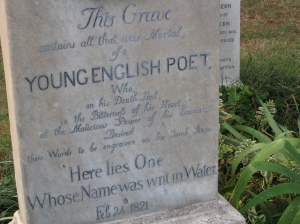 The grave of the poet Keats

Keats’ grave is now one of three in a small cluster of graves comprising those of the artist Joseph Severn and Severn’s infant child.  I found the whole scene very moving.  Keats died aged only 25, having travelled to Rome to try to regain his health, while his close friend Joseph Severn outlived him, surviving to the grand old age of 85.  Keats’ grave contains no mention of his name; at his request, the stone is inscribed with the words, “Here lies one whose name was writ in water.”  Severn’s grave speaks of the artist’s close friendship with Keats, and how he had lived to see his friend numbered among the world’s greatest poets.  I thought how very sad it was that Keats hadn’t lived to see his own success, and how Severn had had to bear the loss of his friend, finally being laid to rest alongside him. 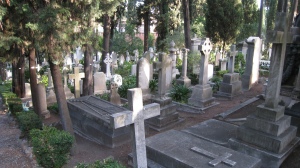 A view of the Protestant Cemetery

After standing by the graves for some minutes, with a slight lump in my throat which took me by surprise, I decided to explore the rest of the cemetery. The bit where Keats is buried is the older part of the cemetery, and there’s a newer part by the entrance which is a lot more crowded, with all shapes and sizes of tombs and gravestones commemorating the huge variety of people who had connections with Rome.  Shelley’s is one of them, and I found someone with the surname Mendelssohn, whom I suspect was some relation to the composer.

Before I left I went into the small gift shop/visitor centre near the entrance and, exchanging pleasantries about the beauty of the cemetery with the man in charge, purchased some postcards and a small book of Keats’ poetry.  I then went back into the older part of the cemetery and sat reading on a bench with a great view of the Pyramid.  The sun was blazing down and I thought to myself that life doesn’t get much better than that!

I wholeheartedly recommend a visit to the Protestant Cemetery if you’re a seasoned traveller to Rome and haven’t been before.  I get the impression that a comparatively small number of people visit, but it’s very easy to get to – just get off at Piramide on the Linea B Metro line and aim for the Pyramid – you can’t miss it!  The entrance is on an inauspicious-looking road to one side of the Pyramid but it’s easy to find.

I graduated from Oxford University in 2009 with an MA in Classical Archaeology and Ancient History from St John's College. After graduating I worked as a Geographic Researcher at Holidaylettings.co.uk, spending lots of time researching and writing travel guides to worldwide destinations, developing my copywriting skills. After working as a copywriter and content consultant at White.net (formerly SEOptimise), where I most enjoyed working with travel clients, I went self-employed. I now divide my time between freelance copywriting and running the business I set up with my boyfriend - AirExperiences.co.uk - selling aviation gift experiences. In my spare time I'm training for a Private Pilot's Licence, and I also enjoy travelling, wine and baking. My favourite authors are Charles Dickens, Gabriel Garcia Marquez and Bill Bryson.
View all posts by Rachel Ingram →
This entry was posted in My favourite places, Recommendations and tagged Keats grave, Keats grave Rome, Protestant Cemetery Rome, Pyramid of Gaius Cestius Rome, Rome blog, Rome travel blog, Severn grave, Shelley grave. Bookmark the permalink.
Loading Comments...
%d bloggers like this: