Oh my goodness, has it really been that long since I last updated?

I can explain. First it was down to nothing but my own laziness/busy-ness. Then it was because I started going gliding again for the first time since 2008, and as a result of that, I met a guy, moved to Shakespeare’s County with him and now never have the time to update!

But I thought I’d write a quick update to let you know that I’m still here, and tell you a bit about trips I’ve done since I last updated and the travels I have planned for the rest of the year. I’m afraid they’re not all to Rome, but as they say, variety is the spice of life…

I went to Rome back in September for a long weekend with my mum, which was really nice. It’s a bit of a tradition of ours, and it’s nice because we’re both interested in the same sort of stuff – especially the traces of very early Christianity that are all over the city if you know where to look. I stayed an extra night on my own and met up with a friend of mine, who just happened to be in Rome with a friend of hers that night. We went out for a fab meal at Da Baffetto in the evening, and the next day I took them on a bit of a tour (my friend’s friend had never been to Rome would you believe!). We discovered the most fantastic place for lunch: Obika, a mozzarella bar!

Sublime plate of mozzarella at Obika

It was absolutely amazing – I had no idea that there were so many different kinds of mozzarella. They bring out a massive platter of all the varieties, along with some tomatoes, bread, olive oil and balsamic vinegar, and let me tell you, it is the food of the gods. There are branches of Obika in other countries if you can’t make it to Rome, but it’s definitely something that you should put on your bucket list if you’re at all interested in cheese.

In December Lee and I had our first trip abroad together – a nice Christmassy weekend in France. We went to Boulogne and stocked up on French food and wine, wandered around a Christmas market (at which there were, inexplicably, llamas), treated ourselves to mouthwatering steak at a lovely restaurant in the square, and went in the cathedral. It’s surprisingly do-able in a weekend and if you get Eurotunnel tickets, an overnight trip is only about £30 each way.

We returned to France again in April, stopping overnight in Boulogne en route to Bruges, where we spent a delightful sunny day. I had been to Belgium once before, but just passing through on the way to Germany with my grandparents many years ago, so there hadn’t been time to take in the cultural differences then. From the moment we parked the car I was struck by how neat and tidy everything was – the carpark at the station was pristine and there was a massive secure room absolutely full to the brim with bikes. 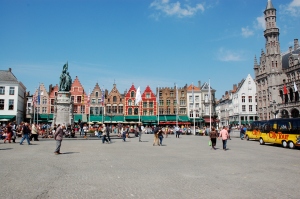 The main square in Bruges

The historic centre of the city is conveniently signposted for tourists arriving by train, so we had a leisurely walk through a park and then spent much of the day wandering the city’s meandering streets. The number of chocolate shops was quite amazing, and inevitably we spent quite a few Euros on stuff to take back. I hadn’t realised that Bruges has lots of canals, a bit like Venice, and there was a nice little market set up along the banks of one, where we indulged in waffles purely because we were in Belgium. We ended up sitting outside in the main square watching the world (and a marching band) go by. All we could just about afford in the extortionately priced restaurants was a ham sandwich to share, a giant beer for Lee and a glass of red wine for me. Needless to say, I came away sunburnt, but it was a glorious day.

Next weekend we are off to Scandinavia, which will be my first trip to that part of the world, though Lee has been before. We are going to Copenhagen for the day on Friday, before crossing the bridge into Sweden for the rest of the weekend, where we are attending the wedding of my dear friends Hanna and David in a village not far from Lund. It should be amazing, though I’m not really looking forward to a 3am start on Friday!

The next trip we have booked after that is a weekend in Rome to celebrate our anniversary in October. I can’t wait to show Lee around my favourite city and introduce him to all the best gelaterias! I was surprised by how much the price of flights has gone up since I last went. In the end though we got a good deal with Monarch, which I discovered via cheapflights.co.uk. We’ll be staying in my usual B&B, which is five minutes’ walk from St Peter’s, so that’ll be lovely.

Our last trip of the year will be to Tunisia for a week in November. We booked through Thomas Cook so I’m not expecting five-star luxury, but it will be a great opportunity to experience a completely different culture from anything we’ve ever experienced before. And I’m told we can ride camels on the beach, which itself is reason enough to go.

I graduated from Oxford University in 2009 with an MA in Classical Archaeology and Ancient History from St John's College. After graduating I worked as a Geographic Researcher at Holidaylettings.co.uk, spending lots of time researching and writing travel guides to worldwide destinations, developing my copywriting skills. After working as a copywriter and content consultant at White.net (formerly SEOptimise), where I most enjoyed working with travel clients, I went self-employed. I now divide my time between freelance copywriting and running the business I set up with my boyfriend - AirExperiences.co.uk - selling aviation gift experiences. In my spare time I'm training for a Private Pilot's Licence, and I also enjoy travelling, wine and baking. My favourite authors are Charles Dickens, Gabriel Garcia Marquez and Bill Bryson.
View all posts by Rachel Ingram →
This entry was posted in Miscellaneous Rome. Bookmark the permalink.
Loading Comments...
%d bloggers like this: